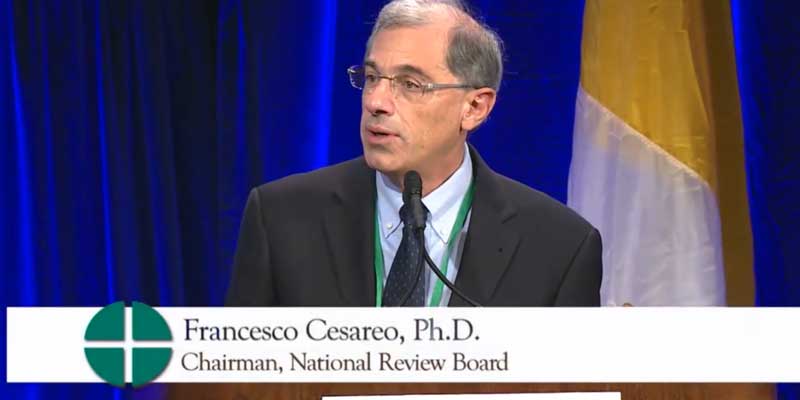 Chances are, you’ve only seen quick summaries of the address by Francesco Cesareo, the chairman of the National Review Board, to the US bishops’ meeting this week. I strongly recommend reading the whole text. It’s remarkable.

Notice first the tone of the address. Cesareo delivers a series of home truths, in candid language. He is not giving the bishops a few mild recommendations; he is taking them to the woodshed. Saying what so many lay Catholics believe, he tells the body of bishops that they have lost the trust of their people.

Next notice the specific recommendations that Cesareo does make. He reports that the National Review Board still wants action on the items that had been on the USCCB agenda until the Vatican intervened. He says that bishops who have betrayed their responsibilities should be called to account, since “it remains clear that some bishops have escaped the consequences of their acts of omission regarding abuse, and that little is being done to address this injustice.”

Speaking for the Review Board, Cesareo suggests several different means by which bishops might hold each other accountable, including “barring guilty bishops from USCCB membership or attending national meetings.” He strongly and repeatedly advocates fraternal correction, suggesting that bishops “appeal to the Holy See if a particular bishop appears unable or unwilling to act in the best interests of the entire Church.”

Archbishop Vigano’s allegations must be addressed. No stone must remain unturned. Ignoring these allegations will leave a cloud of doubt over the Church, as questions will linger.

However, the most dramatic section of Cesareo’s address comes when he praises Bishop Robert Morneau, who voluntarily announced his withdrawal from public ministry in recognition of his failures to curb abuse. Cesareo reflects:

A grand jury report or canonical proceeding did not force him to withdraw. He did so because his conscience dictated such action.

And then—pay careful attention; this is significant—in the next sentence the chairman of the National Review Board goes on to urge other bishops to resign:

Bishop Morneau’s actions exemplify those that some of you must take to restore trust and allow the deep wounds caused by the current crisis to heal.