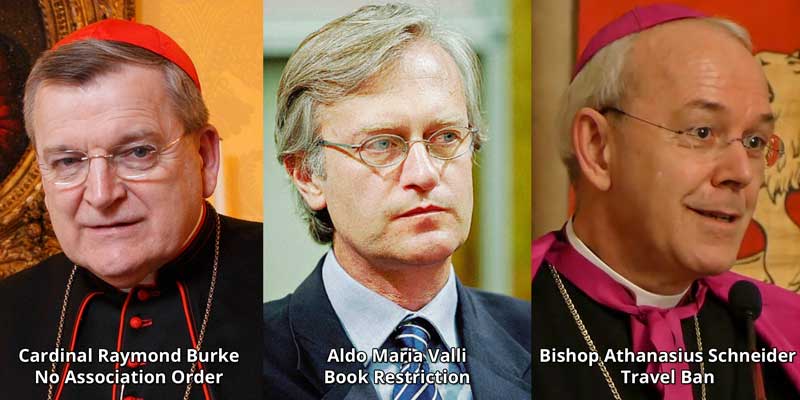 In the past 24 hours, we have received reports that the Vatican has moved to restrict three individuals which it perceives to be critical of its actions.

Italian author Aldo Maria Valli has just published a volume detailing the work of whistleblower Archbishop Carlo Maria Viganò — but Church officials have pressured the publishing company to restrict future editions so as to protect Pope Francis’ image and reputation.

Bishop Athanasius Schneider has received a verbal injunction from the Vatican asking him to reduce the frequency of his trips abroad. This provision was given directly by the Secretary of State, Cardinal Pietro Parolin, only verbally. No document was provided, making it impossible for Bishop Schneider to appeal the decision.

Finally, it has been reported that United States Nuncio Archbishop Christophe Pierre has told the American bishops in Washington D.C not to invite people like Cardinal Raymond Burke for talks, and when Burke’s presence cannot be avoided, they should not take part in such events.  Again, the order was only given orally and reportedly ordered by Vatican Secretary of State Cardinal Pietro Parolin.

This all coming from the FrancisChurch that repeatedly preaches about tolerance, accompaniment and mercy.