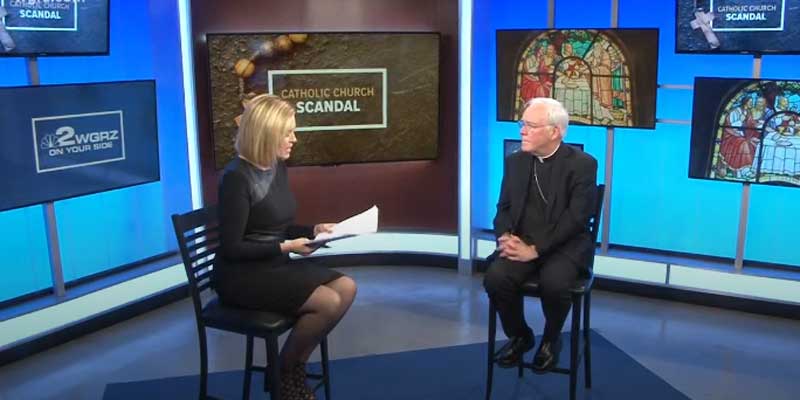 Bishop Richard Malone of the Buffalo Roman Catholic Diocese says he hopes for an opportunity to finish his work in Western New York as he tries to lead the congregation through the current priest abuse scandal.

Bishop Malone said he will not resign despite calls to do so. He spoke with Two On Your Side’s Maryalice Demler on Sunday afternoon.

“I hope people believe enough in the Richard Malone they’ve come to know,” said the Bishop. “I am sincere in my admission of failure. I feel I’ve been handling the rest of the work, well, not perfectly. I just hope I’ll be given a chance to finish it.

The Bishop did say he will make sure.

The interview comes one day after two more priests were placed on administrative leave. In the spring, the diocese released a list of 42 priests accused of abuse. Just last Sunday, 60 Minutes reported on the scandal and interviewed the former executive assistant for Bishop Malone. Siobhan O’Connor says internal documents show the number of accused priests is actually 118.

On Monday, the Bishop will meet with his brother priests to discuss the scandal and ways to move forward. He told Two On Your side that he is open to hearing from others.

“There will be an opportunity for you to have discourse? they will be allowed to speak?” asked Demler. “Oh, of course. Absolutely,” said Bishop Malone.

Bishop Malone told Two On our Side that the diocese is working on a plan to create a new policy on how they handle abuse claims involving adults. He also acknowledged that paying people who were abused will cost the diocese a significant amount of money.

“(Bankruptcy) is a possibility,” said Bishop Malone. “We are hoping a praying we don’t get there because we need the funds to do the good work of the Church.”

You can catch our full exclusive interview with Buffalo Bishop Richard Malone on our website tomorrow, and we’ll have more tonight on FOX 29 News at 10, Channel 2 News at 11 and on Daybreak Monday morning.