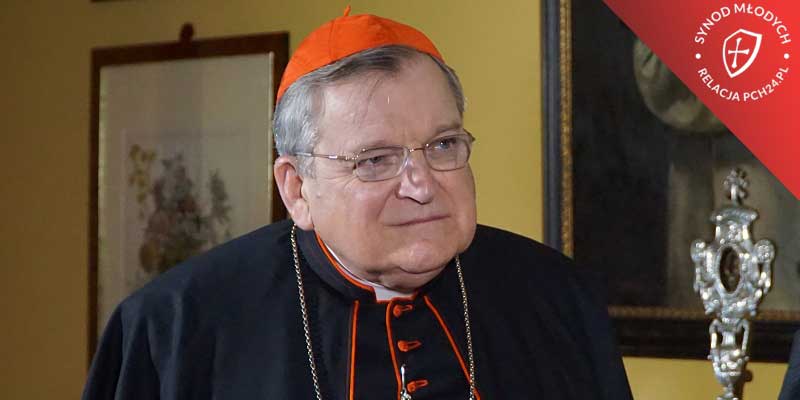 Praised be Jesus Christ! Today we have a particular honor of being in the apartment of His Eminence Cardinal Leo Burke who is well known to our audience.

Your Eminence thank you for your time, for your time for our Polish viewers. I would like to start our conversation asking a question about a very difficult topic. It is the great scandal of sexual abuse in the Church nowadays. We know that there was such a situation in your country, in the USA. What will be the future of the Church in your country? We have heard that there is a great division among the bishops, especially after the publication of the letters of Abp. Viganò. What is the future of the Church in the USA?

It’s going to be a difficult future in the sense that the people rightly feel profoundly betrayed when they see that a priest, who had been abusing young people, was not only promoted to be a bishop, then promoted to be a bishop of a diocese and archdiocese, and then of the archdiocese that is our national capitol, and then made a cardinal. And everybody knows now that it was known by certain people in the Church that that man was an abuser and yet they covered it up and promoted him. And this has to stop, this can’t be. I believe that if the proper canonical measures are taken, that the accusations that have been made are thoroughly studied and decisions are made regarding the truth of these accusations and that those who are responsible are properly sanctioned and that the people will slowly have their faith restored. But anyway there is an attempt to simply… not to (…), not to take it seriously, and the people, who are good Catholics are not accepting this and I don’t blame them, I don’t accept it either.

In this sad case there is something that is difficult to comprehend. Many people after the scandal would like to destroy the hierarchical Church because their logic is like this: If there are a few guilty bishops, guilty of a great sin, of something terrible, so we have to abolish the hierarchy of the Church. Is it a good way of thinking? Would the Church without its hierarchy be still a Catholic Church?

No, it would not. And that’s not a good way to think. Because we see from the first pages of the Gospel that Our Lord constituted that His Church’s hierarchical. He called a party of Twelve and placed them as heads and shepherds of the Church in his own person through the sacrament of Holy Orders. And because some bishops have betrayed grievously their office, that doesn’t mean that the hierarchical Church is at fault at all. And what needs to be done is not to treat this matter in some kind of a secular way and say: Well, the bishops didn’t do their jobs and now we simply eliminate the bishops and take over their responsibility. No, the way is to appoint good bishops and then make sure that our seminaries are as sound as possible so that good priests are ordained to that some of whom will eventually be called to be bishops.

Why is the Church hierarchical? Why isn’t it democratic? Because there are a lot of people, also in our country, in Poland, so called liberal Catholics etc., who say: No, the style of ruling in the Church is too old.

I have to ask about the homosexual aspect of the great crisis in the USA but of course not only in the USA. There have also been some cases in our country, in Poland. And we know that Ireland has been touched by this problem. It isn’t easy to be a Catholic nowadays in the Church. The liberal media would like us to think, and also some Catholic media would like us to think that the greatest problem is clericalism and not the homosexual culture. Cardinal Grocholewski has said to the Polish media that that homosexual culture is one of the greatest problems in the Church and that it can be a reason for the sexual abuse scandal. Do you agree with that?

I agree completely with him. There is no question that the majority of the acts which have been committed are homosexual acts done with young men. And somehow this kind of egregious morale fault has been protected and in some way even promoted. And so we have to address the fact that there are priest who have these tendencies and are acting upon them. What happens is that, when you say this, people – and it has happened to me personally – people say: You’re saying that people with the same sex attraction are always abusing children. No, I’m not saying that. I’m saying that the priests who have abused children have done it by way of homosexual acts with young men. And that means that the moral character of our seminarians and priests in some way is not what it should be. Today there is a big confusion in the Church and certainly in secular society that if you say that homosexual acts are evil – which they are always and everywhere – that you’re hateful towards people who have homosexual tendency. This is absolutely false. St. Augustine used the formula – Our Lord himself shows us this in the Gospel: We love the sinner, we care with our heart for the sinner, but at the same time we hate the sin. And the way we love the sinner is by making clear that the sinful acts are evil and must be stopped. And so the other way the real issue is not addressed. To say that it is a question of clericalism I think is a way of avoiding a big difficulty that we have. This is not the first time in the Church that there was this difficulty. And Peter Damian had to write the whole treatise on the question of homosexual conduct in his time. First of all when people say: “Oh, no, this is caused by clericalism”, I ask them: What do you mean? And most people can’t tell me what they mean by clericalism. It would be clericalism that would protect or even promote priests who are doing evil things, yes. But the evil acts themselves don’t come from clericalism. And most of the priests with whom I have had contact during my years – priest and bishops who have sadly committed those acts – it wasn’t done through some kind of clerical mentality. They simply had an amoral weakness and it wasn’t properly corrected and they didn’t use the proper spiritual means to remain chaste and perfectly continent.