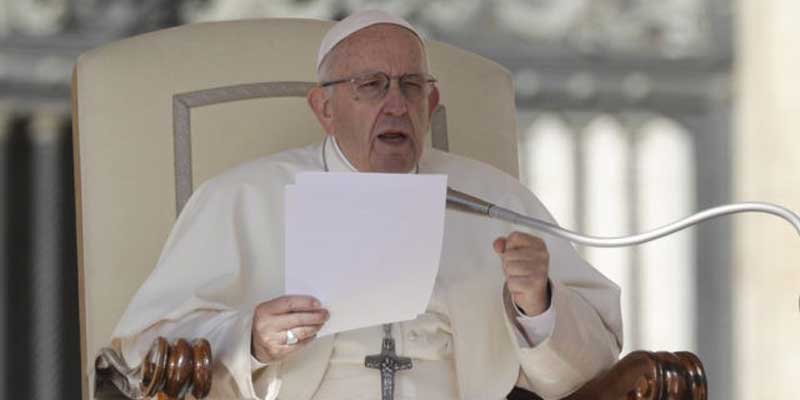 In his final address to the synod of bishops — which he delivered off the cuff — the pope said that while the sons and daughters of the Church are all sinners, the Church herself is holy.

“Because of our sins, the great accuser takes advantage and roams about seeking someone to accuse, as we read in the first chapter of Job,” Francis said, apparently referring to the devil as well as those who play into his hands.

“Right now, he is accusing us forcefully, and this accusation becomes persecution as well,” he said.

Some in the Church are persecuted directly, such as those in the Middle East, the pope said, but “there is also another kind of persecution, of continual accusations to soil the church, and the Church should not be soiled. Her children yes, but not the mother, and the mother defends herself from the great accuser with prayer and penance.”

“That’s why I asked to pray the Rosary, to Our Lady, to St. Michael the Archangel. It is a difficult time because the accuser is attacking the mother through us and the mother should not be attacked,” he said.

In late August, the former papal nuncio to the United States, Archbishop Carlo Maria Viganò, issued an 11-page report alleging that Pope Francis had knowingly rehabilitated McCarrick despite his crimes, and for that the pope should step down.

Viganò said that he had personally informed Francis in 2013 of McCarrick’s history of abuse, along with sanctions imposed on his ministry by Pope Benedict XVI, and yet the pope lifted those sanctions and involved McCarrick in the naming of future U.S. bishops.

Questioned about these charges by journalists, Francis refused to confirm or deny them, but soon after began comparing those who make accusations to the devil.

On two separate occasions, the pope used his homily at morning Mass to condemn accusers as allies of the devil.