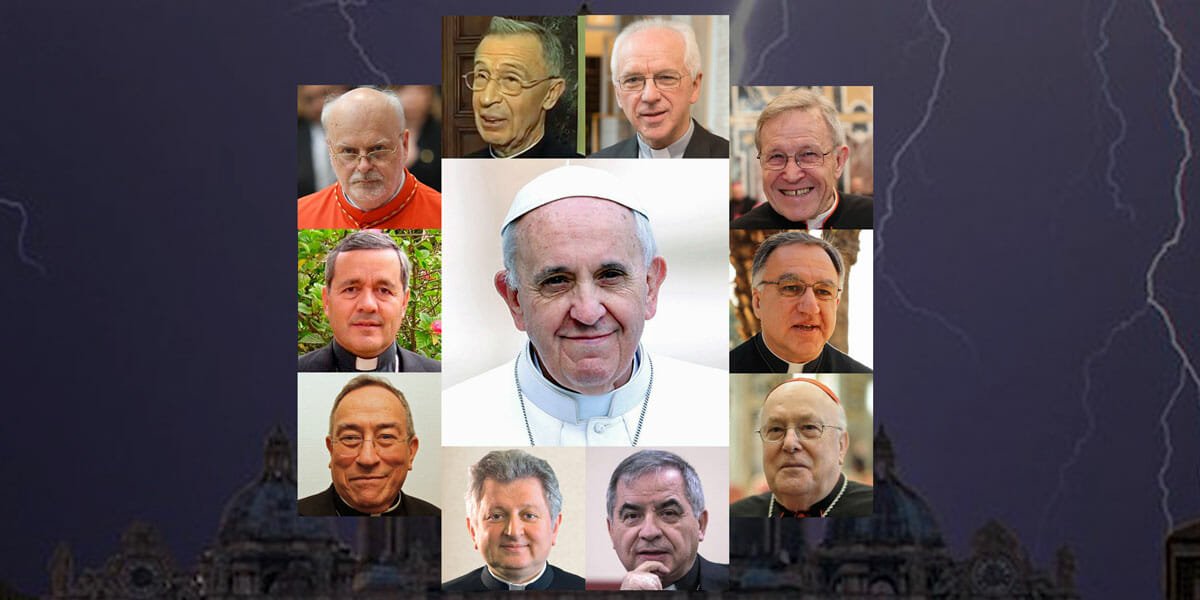 Just over five years ago, the Argentine cardinal Jorge Mario Bergoglio came out onto the loggia of St. Peter’s as Pope Francis. It is useful to recall the situation of the Church that he inherited.

The sex-abuse scandals that had rocked the Church in America and some European countries at the turn of the millennium were subsiding, or so it seemed. But the dysfunction at the Vatican under Pope Benedict XVI had overwhelmed the scholarly pontiff. Benedict’s chosen reformer for the corrupt Vatican Bank, Archbishop Carlo Maria Viganò, initially had success in turning blood-red deficits toward the black, but he was swiftly undermined and sent packing to be the Vatican’s ambassador to the United States. Benedict’s butler, Paolo Gabriele, was arrested for stealing and leaking to the media documents revealing the intrigue and backbiting within Vatican City. Benedict assigned three cardinals to investigate the VatiLeaks scandal. They returned to the pope a long dossier, which was widely reported to contain an account of the financial and sexual misdeeds of senior officials in the Vatican itself. At about this time European banks began squeezing the Vatican Bank, and by the turn of the New Year the Vatican’s own ATMs stopped working. Their function was restored days after Benedict announced that he would resign the papacy, the first papal resignation in five centuries.

Two storylines emerged out of the election of Bergoglio. The first was that the Church had elected a man who had a common touch and would stop the Church from becoming a museum of dead dogmas. The second is that the Church had chosen him because he had shown the energy to reform the dysfunctional curia.

At first, Pope Francis seized the momentum on both fronts. He quickly earned a great deal of positive media for making symbolic breaks with his predecessor. Some of the more traditional vestments were immediately dropped, along with the red shoes. He decided against taking up residence in the papal apartments. Instead he would live in Casa Santa Marta, a Vatican hotel. And he quickly began making his earthy and endlessly quotable comments to the media. He gave candid interviews to the atheist Italian journalist Eugenio Scalfari. Asked to comment on how he would counsel gays, he responded: “Who am I to judge?” Francis also quickly formed a special group of nine cardinal advisers to help him accomplish the work of reforming the Vatican itself.

The Francis pontificate was to be an era of mercy for sinners at the peripheries and accountability for malefactors at the Vatican. Instead, almost the opposite has taken place.

While trying to please the progressives who elected him, Pope Francis has plunged the Church into acrimony and confusion. He has put forward a revision of the Church’s teaching on the sacraments that puts traditional concepts of Christian virtue out of reach for all but the most “heroic” Christians. It is a theological revolution that not only threatens the coherence of the Catholic faith but has the potential to affect all Christians.

As for reform? Forget it. Nearly half of the members of Pope Francis’s reformist team have been pulled into sexual-abuse scandals themselves. Cardinal George Pell has returned to his native Australia to face charges of fondling children. Cardinal Óscar Rodríguez Maradiaga has been accused of protecting churchmen who fostered a culture of sexual predation in the seminaries of Honduras. The German cardinal Reinhard Marx was revealed to have been negligent in investigating an abusive priest when he was bishop of Trier. American cardinal Sean Patrick O’Malley, who heads the Pontifical Commission for the Protection of Minors, has been exposed as having passed the buck when a priest tried to inform him of the serial sexual predation of Cardinal Theodore McCarrick against seminarians.

These twin scandals of the Francis papacy became intertwined this summer. Reports came out of the Archdiocese of New York that McCarrick had sexually abused a child, and he resigned from the College of Cardinals. But that was not the end of the story. The frustrated reformer of the Vatican Bank, Archbishop Viganò, soon issued a stunning set of public accusations against Francis and his closest collaborators. Viganò charged the pope with having knowingly rehabilitated Cardinal McCarrick and collaborated with other immoral churchmen in order to pursue his progressive theological agenda. Viganò called on the pope to resign in disgrace.

The Vatican’s response to Viganò has been to denounce him forcefully — to accuse him of breaking communion with the pope — while at the same time admitting by inference that his main charge is correct. The Vatican noted that McCarrick had not been formally sanctioned during the Benedict papacy, owing to a lack of evidence — but thereby admitted that McCarrick had at least been restricted. McCarrick took on a larger public profile after the election of Francis, indicating either that these restrictions were lifted or that the Vatican was negligent in continuing to enforce them.

Perhaps we should have seen this coming. The fact is that Pope Francis has conducted his papacy in a way that made Viganò’s claims immediately credible. Francis appointed a bishop in Chile, Juan Barros Madrid, over the loud protests of laity there who accused him of covering up child abuse. Francis scolded these people as calumniators, but eventually the scandal overwhelmed him — and he was forced to send in investigators, who uncovered a Chilean church mired in corruption. In Italy, after interventions by two influential allies of his theological agenda, Francis restored to ministry an infamous priest, Mauro Inzoli, who had molested children in the confessional and who had been defrocked by the relevant Vatican authorities. As civil trials in Italy revealed to the public the depth of Inzoli’s depravity, Francis removed him from ministry again.

There is a type of churchman that Francis seems to favor: the morally compromised and the doctrinally suspect. The archbishop of Bruges, Jozef De Kesel, was known to promote the ordination of women and the making voluntary of priestly celibacy, and was credibly accused of knowingly appointing a pastor who had molested a child. Francis made him a cardinal. There was the archbishop of Stockholm, Anders Arborelius, who ignored calls to investigate a pedophile priest for years. The victim was told to go see a therapist instead. Arborelius is sympathetic to the idea of creating a female version of the College of Cardinals. Francis made him a cardinal, and Arborelius speculated that his elevation was a way for the pope to honor Sweden’s commitment to refugees. There’s also Giovanni Becciu, who was working for the pope’s secretary of state. When the accounting firm PricewaterhouseCoopers began uncovering financial fraud in the Church, Becciu suspended its audit. The auditor general from PwC later said he was forced out on trumped-up accusations; Becciu accused that accountant of being a spy. Francis then made Becciu a cardinal. Another cleric, Archbishop Luis Ladaria Ferrer, is set to stand trial in France for his role in covering up a child-sex-abuse scandal in Lyon. Francis made him the head of the Vatican’s doctrinal office, which adjudicates abuse cases.

Or consider Monsignor Battista Ricca, reportedly Francis’s “eyes and ears at the Vatican Bank.” Ricca was widely known for engaging in affairs with men at different posts during his clerical career. He was attacked in an area of Montevideo known for cruising, and he had to be rescued from an elevator in which he was trapped with a rent boy. (It was a question about Ricca that Francis made the occasion of his headline-grabbing statement “Who am I to judge?”) And finally there is the man known as the “vice pope,” Cardinal Rodríguez Maradiaga, the one being charged by seminarians in Honduras with allowing a culture of predation to flourish. Rodríguez Maradiaga first became famous across the Catholic world for saying that the Church scandals in Boston in 2002 were the invention of Jewish-controlled media who were avenging themselves on the Catholic Church for “confirm[ing] the necessity of the creation of a Palestinian state.”

The truth is that Jorge Bergoglio had another mandate. It is candidly discussed by journalist Austen Ivereigh in his book The Great Reformer. Ivereigh, who has become the Anglo­phone world’s papal hagiographer, details how a group of progressive European churchmen that had been meeting for decades at St. Gallen in Switzerland to discuss their views on the Church had come to see Bergoglio as their candidate. Among these were the archbishop of Brussels, as well as the Belgian cardinal Godfried Danneels and the German cardinal Walter Kasper. What they wanted was a pope who would open up all the theological debates that had been closed by John Paul II and Benedict XVI. Communion for the divorced and remarried. A revision of Church teaching on homosexual relations and relationships.

Kasper was a theological progressive who believed that the Church was no longer able to reach modern man in a pluralistic society. He was also given to sometimes grand pronouncements, writing that “dogma never settles a theological issue once and for all.” Danneels was Belgium’s leading bishop from 1979 to 2010; as it did in Ireland and Quebec, secularization seemed to come almost overnight in Belgium, and Danneels has occasionally been a cheerleader for these changes. He wrote a private letter to his prime minister, Guy Verhofstadt, praising the government’s decision to allow same-sex unions. It was a position he would reiterate emphatically years later, telling two newspapers that the Church “has never opposed the fact that there should exist a sort of ‘marriage’ between homosexuals, but one therefore speaks of a ‘sort of’ marriage. But it is not true marriage, that between a man and a woman, therefore you have to put another word in the dictionary. But that it is lawful, that the law can legitimately provide for it, that’s something about which the Church has nothing to say.” In a major public scandal, Danneels was revealed to have pressured the victim of sex abuse by a Catholic bishop, the victim’s uncle, to remain silent. He was enduring a quiet and disgraced retirement, but after pushing for the election of Bergoglio, he appeared on the loggia next to the new pope. He was also invited by Francis to contribute to the Synod on the Family.

That is why it is easy to credit the allegations against Francis. He’s done it all before.