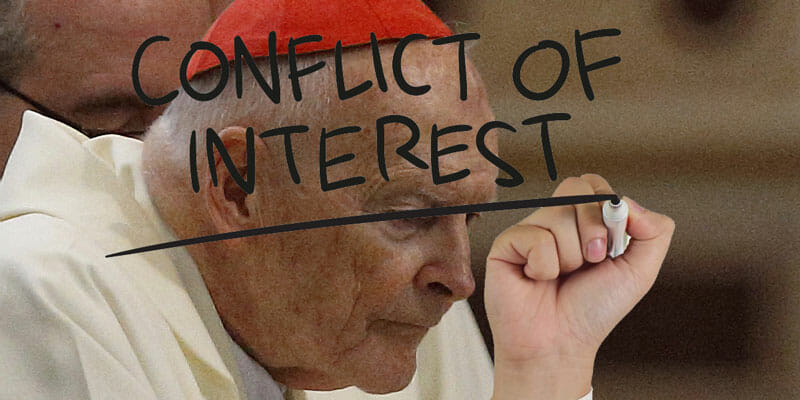 On July 28, 2018 the Vatican announced that Pope Francis had accepted Archbishop Theodore McCarrick’s resignation from the College of Cardinals. This had the immediate effect of ending his nearly thirty-year relationship with the Papal Foundation, a charitable organization he helped to found, which is based in suburban Philadelphia and has an endowment of $200 million.

As an ex officio member of the board of cardinals which controls the Foundation, McCarrick advocated and voted four times to approve an extraordinary, expedited grant of $25 million to the Vatican, in order to help it bail out a scandal-plagued dermatology hospital that it controls, the Istituto Dermopatico dell’Immacolata (IDI) in Rome: first in executive session in June 2017, then at the Foundation’s annual meeting in December 2017, again in January 2018, and finally in April 2018.

During at least the latter three votes, then-Cardinal McCarrick knew that he was under a Vatican-authorized investigation, carried out by the Archdiocese of New York, for sexually molesting a boy. According to a source with first-hand knowledge of the matter, McCarrick knew by October 2017 at the latest that he was under investigation. Because the recipient of the $25 million grant was the Vatican, which was the very entity that would determine McCarrick’s fate as a result of the investigation it authorized into his conduct, McCarrick appears to have had a manifest and gross conflict of interest in considering the grant request in the best interest of the Papal Foundation. McCarrick stood to benefit personally if, by helping to secure $25 million for the Vatican, he could win leniency in how it handled his sex abuse case.

Under Pennsylvania law, the directors of non-profits such as the Papal Foundation are under an obligation to disclose material conflicts of interest to their organization’s directors and officers, and to recuse themselves from board decisions in which their conflict of interest is implicated. McCarrick failed to make any disclosures to the Papal Foundation’s board or to recuse himself from board decisions, according to people present at the board meetings in 2017 and 2018.

If McCarrick knew that he was under investigation during any of the four board votes in which he participated, then under settled principles of corporate law, he appears to have committed a fraud upon the board of the Papal Foundation. According to Robert T. Miller, a professor of corporate law at the University of Iowa, “The legal effect of McCarrick’s apparent fraud upon the board is to taint the vote of every board member participating in the decision.” This may render the grant voidable and returnable to the Foundation at the instigation of the Attorney General of Pennsylvania or any of the clerical or lay members of the Foundation’s boards.

In June 2017 Cardinal Donald Wuerl received the grant request for $25 million from the Holy See’s Secretary of State, Cardinal Pietro Parolin, at the behest of Pope Francis. Wuerl pushed hard to meet it immediately. According to the draft of board minutes, he said the grant was an emergency measure on which the hospital’s survival depended. Wuerl moved formally to take it up later in June, outside of the Foundation’s normal grant cycle, and he convened an executive session of the cardinals’ board—including McCarrick, who also lobbied for making the grant—and drove a summary vote to approve the grant.

Meanwhile, in May 2017, just weeks before Wuerl received the grant request from Parolin, McCarrick’s alleged victim had contacted the Archdiocese of New York’s Independent Reconciliation and Compensation Program with the charges against him. Before the Archdiocese of New York could investigate the charges, it had to receive authorization from the Holy See, for as a cardinal McCarrick lay under the canonical jurisdiction of the Holy See alone.

In August of 2017 the Foundation sent $8 million to the Vatican Secretariat of State—without having received from the Vatican a formal proposal for how the money would be spent, financial projections, a statement of the hospital’s financial condition, or an agreement about how the performance of the grant would be tracked, reported back to the Foundation, or evaluated.

It was only after $8 million had been sent to the Secretariat of State that the Foundation’s entire tiered board—cardinals, bishops, and laymen—was presented with the extraordinary request, and they were then asked to approve the full $25 million (including the already-sent $8 million installment) at the Foundation’s annual meeting in Washington on December 12, 2017. After some tense discussion, and a presentation by Foundation attorneys about the board’s fiduciary duties, Wuerl made the remarkable decision to hold the vote by secret ballot. Fifteen cardinals and bishops and nine laymen comprise the Papal Foundation’s full board. According to a source who was present at the December 12th meeting, the result of the secret ballot was 15 votes in favor, eight against, and one abstention. One of eight laymen voted for the grant.