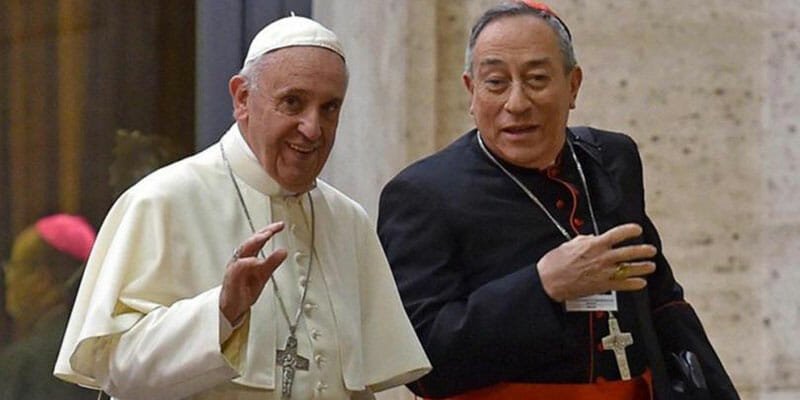 Among the variety of statements that have followed since the “bomb” of Archbishop Viganò’s testimony exploded last month, we wish to report a statement made by Cardinal Rodriguez Maradiaga, in an interview on September 12, 2018.

The interview begins by recalling that Rodríguez Maradiaga is a “friend and close collaborator of the Pope,” and that the Viganò dossier “converts him into the protector of the abuser, Cardinal McCarrick.”

The first question of the interview is: “The Viganò dossier accuses the Pope of covering up Cardinal McCarrick’s homosexual relations with seminarians and ends by asking Francis to resign. What do you think about this?”

Rodríguez Maradiaga replies: “To make something of a private order into an atomic bomb that explodes worldwide, and whose shards harm the faith of many people, does not seem proper to me. I think that a matter of an administrative nature should be dealt with using more serene and objective criteria, not with a negative attack of very bitter expressions. I believe that the Bishop Viganò whom I have known is not the same person who writes and says such things.”

In reflecting just a little on these few lines, one finds a great deal of more important information than appears at first glance. First of all, there is an implicit but very clear admission of the truth of the facts stated by Viganò. Any dispassionate reader who has read Viganò’s document can hardly doubt what it says: on the one hand, because of the privileged position he held as Nuncio; and on the other, because of the number of high-ranking witnesses, both in the Roman Curia and in the American episcopate, who are directly named by him as accomplices, and who could easily deny it if what he said were false.

The main party concerned, i.e. the Pope, then eloquently confirmed by his perfect silence that Viganò is telling the truth about him. (We will leave for another occasion any comments on the Pope’s self-celebration of his own silence in a homily on the Gospel of Luke).

We have also not received any substantial denial from Benedict XVI regarding the sanctions he imposed on McCarrick, except for the clarification that they were “private” sanctions rather than “canonical” in the true sense of the word (otherwise they would have been public).

But the fact is that there were sanctions; that McCarrick, with the complicity of American bishops and Curial prelates, didn’t respect them much; and that they were then mysteriously completely set aside under Francis. The response of Rodríguez Maradiaga now provides further and definitive confirmation that these were facts well known to the Pope and to his “circle of friends,” of which he [Maradiaga] is a prominent member.

But even more instructive is the way in which Rodríguez Maradiaga describes McCarrick’s conduct with these two expressions: “something of a private order,” and “an administrative matter.”

According to the Honduran Cardinal (a prominent member of the C9 and one of the leaders, we recall, of Francis’ much anticipated program of reform), McCarrick’s behavior, which includes soliciting and sodomizing entire generations of seminarians through the continued and notorious abuse of his power as Bishop and Cardinal of the Catholic Church, as well as the continuing sacrilegious celebration of Holy Mass, would be “something of a private order,” and “an administrative matter.”

Without a doubt, this is enough to leave one a bit perplexed. Behavior that has traumatized dozens of young men, destroyed vocations, scandalized thousands of faithful to the point of becoming an “open secret,” yet was protected by the highest levels of the Roman Curia and by the Pope himself, is, for the ineffable Central American Cardinal, “something of a private order,” and “an administrative matter.”