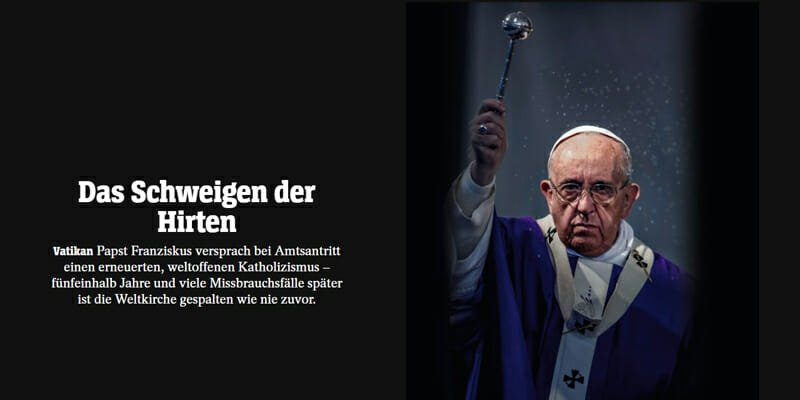 A German-speaking subscriber to Der Spiegel sent me a copy of the German newsmagazine’s big cover piece on Pope Francis. I ran it through Google Translate, which gave me a reasonable sense of the thing.

It is very, very tough — but fair. If this story had appeared in a conservative magazine, it would not have been remarkable. Don’t get me wrong — it’s a good piece. But the fact that it appears in a German magazine with a generally liberal editorial line — well, that’s a bellwether.

There’s little if anything that people who haven’t been following the Catholic scandal story closely this summer don’t already know, but Spiegel does a good job of gathering it in one place. What the magazine also does, and which I haven’t seen from the US media, is speak frankly about the problem of homosexuality in the priesthood. And the magazine strongly criticizes Francis for his self-pity and stonewalling on abuse and other questions.

Here’s how the report begins. Again, the translation is via Google, so it’s bound to be rough:

The earthquake that shakes the Vatican City is scarcely noticeable in the epicenter. Behind high walls there is silence in the ecclesial state. The curtains in front of the papal apartment in the guest house Santa Marta are closed, a Swiss guard is guarding the entrance, a policeman patrols. The control center of the global Church is like a fortress.

Only behind closed doors do cardinals and archbishops speak. About what has happened to the foundations of the Church. It is about, first and foremost, thousands of documented cases of sexual abuse by pastoral workers worldwide. However, it is also increasingly about Pope Francis. He, who started out as a brilliant reformer, threatens to lose his authority — because he often speaks at an inopportune time, but is silent in important moments.

About lies, intrigues, and “a Holy Father, who like no one questions the truth of faith in front of him,” says a grizzled cardinal at the court of Francis.

Look at this quote:

“I did not believe a word of this Francis from the beginning,” says a staunch cardinal who does not want to be named, within the Vatican walls: “He preaches mercy, but is in truth an icy, cunning Machiavellian and worse, he’s lying.”

There is in the piece a good bit about the abuse scandals that Bergoglio left behind in Argentina. An experienced lawyer for victims says that Francis shows a benign face to the public, but a very different one in private, when confronted about abusive priests.

And look at this opening for the section about the decline of Catholicism in Germany’s Catholic heartland:

While the first beer steins are being served on the Sunday morning in the late summer sun in front of the Munich Frauenkirche, there is a still silence inside the cathedral. Not five dozen worshipers have gathered, lost in the benches of the late Gothic hall church.

The crisis of the church does not stop at the Bavarian state capital: less than a third of Munich residents still profess the Catholic faith.

“The true extent of the catastrophe will only be seen in ten years,” the archbishopric says. The pope, who likes to go to the periphery, must not forget one thing: “Anyone who only thinks of the edges will soon have a hole in the middle.”

However, part of the problem in the archdiocese is home-made: that a high-ranking cleric from Munich unabashedly places his lover in the front pew, that in this city, too, openly homosexual pastors are whispering about the unpredictable pope — that everything contributes to the credibility problem of the church, even in what was once the heart of Catholic Bavaria.

By the way, Spiegel interviews Archbishop Georg Gänswein, who personally serves both Benedict XVI and Francis, asking him to clarify whether or not Benedict imposed sanctions on McCarrick, as Archbishop Carlo Maria Viganò alleged.

“I do not say a word about this so-called Viganò memorandum,” replies Monsignor Gänswein. He knows: Whatever he utters, in this historically unprecedented situation with two living popes within the Vatican walls, would be detrimental to either.

This is interesting, because some took Gänswein’s earlier remarks to Tagespost as a denial that Benedict had sanctioned McCarrick. In fact, the monsignor’s words then only indicated that Benedict had not read the Viganò memorandum. They were not a denial of sanctions. In point of fact, Benedict (and Gänswein) remain silent on that point.