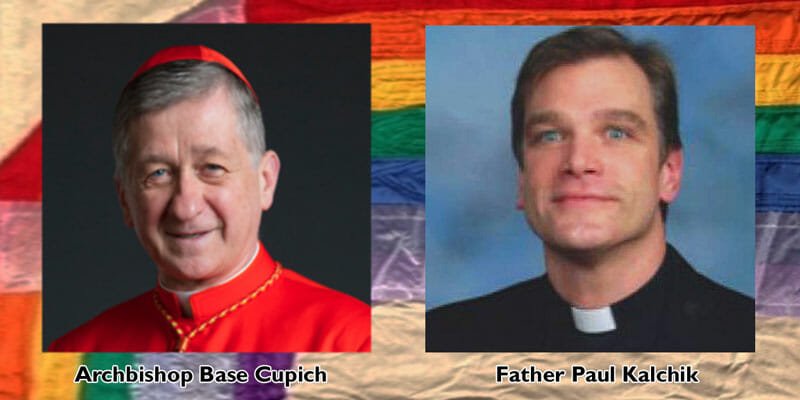 Just hours ago, new Chicago Auxiliary Bishop Mark Bartosic arrived unannounced at Resurrection Parish on Chicago’s Northwest side and told Pastor Paul Kalchik that he had just minutes to get his belongings together and vacate the premises or the police would be called to arrest him for trespassing.

Fr. Kalchik was about to perform a wedding.

Soon after, Fr. Kalchik left for an undisclosed location, accompanied by his brother who had been visiting the parish.

Bp. Bartosic performed the wedding instead, hastily slipping out the door of the church only seconds after concluding the ceremony.

Fr. Kalchik had been ordered by Cardinal Cupich and the archdiocese to report for psychiatric counseling and perhaps confinement yesterday after controversy broke concerning the exorcism and burning of a “gay rainbow flag” on parish grounds last week.

Fr. Kalchik had also called for Catholics to “boycott” masses celebrated by Cardinal Cupich due to Cupich’s alleged involvement in the current clerical sex abuse scandal.

The flag – a rainbow with a superimposed cross – had been unveiled above the altar by previous pastor Fr. Daniel Montalbano in 1991 to signal that the parish would be “gay friendly.” Later taken down, it was rediscovered only recently by Fr. Kalchik.

Fr. Montalbano, a confidant of Cardinal Bernardin, passed away in 1997 at the age of 50.

The “real cause” of Fr. Montalbano’s death was reported by Church Militant as “too sordid to be detailed on paper.”

Today, a small group of parishioners not involved in the wedding but who had heard of the sudden appearance of Bp. Bartosic, stood stunned outside the Church. The group also included two employees who were hastily told by the bishop to report to work as normal on Monday.