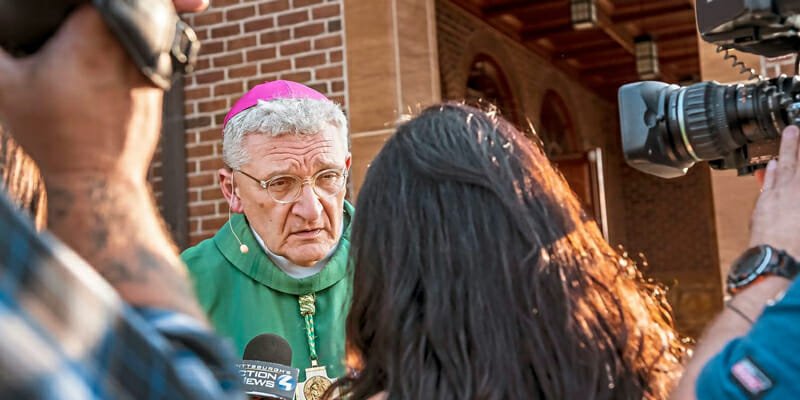 Pennsylvania Catholics are suing all eight dioceses in the state, claiming that Catholic leaders there systematically covered up ongoing sexual abuse by priests.

A massive grand jury report released last month in the state has prompted a nationwide reckoning with the staggering scale of sexual abuse in the history of the Catholic Church and has brought Washington’s Cardinal Donald Wuerl to the brink of resignation.

Now, a victim of abuse and the parent of a Catholic school student are inviting potentially hundreds of others to join them in the class-action lawsuit that they filed Monday in Allegheny County, Pa.

“This lawsuit is brought because Defendants cannot be trusted to act on their own,” the Catholics bringing the lawsuit wrote in their request that a court order the dioceses to disclose information about abusers. “Indeed, through decades of choosing to defend their predatory clergy members over the children of Pennsylvania, Defendants have enabled untold abuse and suffering by children, family members, and others, and have also created a clear and present danger that must be abated to protect the public from future and ongoing harm which is continuing every day it is not abated.”

The two people bringing the lawsuit are Ryan O’Connor, a resident of the Diocese of Pittsburgh who says he was abused by a priest from age 10 to 12, and Kristin Hancock, who reads at Mass in the Diocese of Pittsburgh on Sundays. Both have children in Catholic schools. O’Connor represents the first class named in the lawsuit — victims of clergy sexual abuse — and Hancock, on behalf of her kindergartner son, represents the second class — children currently enrolled in Catholic schools and other programs.

They charge in their lawsuit that the eight dioceses in Pennsylvania — six investigated in last month’s grand jury report, plus Philadelphia and Altoona-Johnstown, which were investigated by the state earlier — are still engaged in an attempt to cover up sexual abuse.