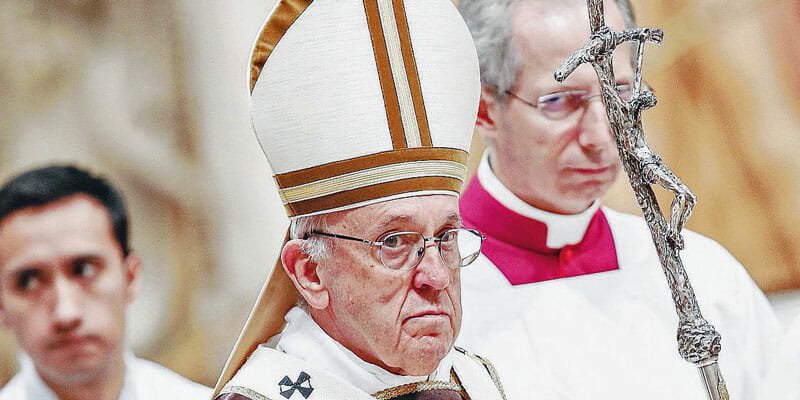 NOTE: this is a Google translation of an article from the Italian newspaper Il Fatto Quotidiano and thus may not be grammatically correct.

Behind the tenacious silence of the Vatican leaders compared to what was denounced in the now famous document of the archbishop Carlo Maria Viganò there could be the fear of being denied by new facts and events that would lead to the explosion of that “atomic war” of which – from days – internal voices to the Holy See refer.

Yesterday we told you the “Farrell case”: it would be deposited in the Vatican, at the Congregation for the Doctrine for the Faith that deals with investigating sexual crimes and against morality, a dossier on the auxiliary bishop of Washington, Kevin Joseph Farrell, who if not denied, it would fall on the Pope like a boulder. Farrell, appointed directly by Bergoglio as head of the family dicastery, would have coexisted with Theodore McCarrick, a former cardinal, formerly archbishop of Washington, involved in several cases of sexual abuse against seminarians.

Contacted the Congregation for a comment, or possibly a denial, the answer was: “There will be no communication”. The Vatican therefore does not deny Il Fatto Quotidiano, but chooses the strategy of silence as for McCarrick. Also because the concerns of the Holy See do not end here.

The new clouds on the horizon concern the concrete possibility that documents contained in the investigation that cardinals Julián Herranz, Jozef Tomko and Salvatore De Giorgi delivered to Benedict XVI before his resignation emerge.

The report contains a detailed and disturbing picture of the moral and material corruption of the clergy, with names, surnames and circumstances. We are exceptionally able to view a document with papal header contained in the investigation, and here we publish an excerpt: it is a list of prelates and laymen who belong to the so-called gay lobby, which through blackmail and secrets could affect, or have conditioned , positions and careers (theirs, like those of others).

We will not reveal the names listed in the list, but we can confirm that among the names there are people removed from the Pope, others moved from the office, others who still hold important positions within the strategic organs for the Vatican, such as Propaganda Fide and even the Secretariat of State.

The investigation of the three cardinals Herranz-Tomko-De Giorgi has so far remained top secret. However, a small but not small circle of people has had the opportunity to read it, and this already before the Conclave, to give a hand to the Holy Spirit who would then take Bergoglio to the papal throne.

To draw up the dossier, tens of priests and high priests were questioned, and documents of all kinds were collected. If public opinion were to know the content of the final report it would be a disaster for the image of the Church, already devastated in the whole world by sexual scandals. But this is what could happen in this phase, since the roaring of crows is a secular practice in the Vatican that comes out every time the gang war gets tougher.

And this time the war is with the Pope himself. Bergoglio, moreover, certainly cannot count on the protection of the Curia, given the complicated relationship that has been established right away, for questions of power, personal and doctrinal (remember only the question of the doubts raised by four cardinals to the Pope on encyclical Amoris Laetitia, in which Bergoglio opened to the communion for the divorced and remarried ones).

But Francis cannot even count on some of his most powerful friends and supporters, overwhelmed by sex scandals themselves or for having covered such behavior: from McCarrick to Farrell, from Cardinal Roger Mahony to Cardinal Godfried Danneels, from Chilean prelates to the powerful cardinal George Pell, the Vatican’s number three, currently in Australia on trial for multiple sex crimes. Pell wanted to resign from the post of Vatican Finance Minister, but the Pope preferred a simple leave. Moreover, when he was appointed number three of the Vatican its events could not be known to Bergoglio himself.

We ask through these pages to Pope Bergoglio, Secretary of State Parolin to clarify about McCarrick, Farrell and the commission of the three cardinals, on moral issues we cannot hide behind silence. Church reform also passes through the truth.