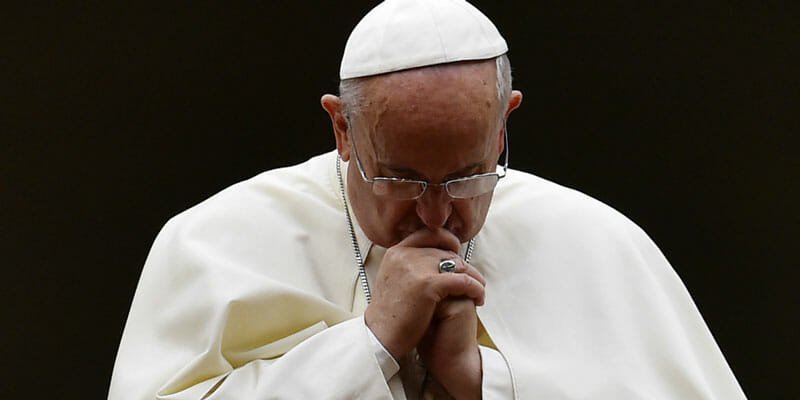 Austen Ivereigh, a biographer of Pope Francis, writes that the pontiff’s silence on the Vigano testimony is a sign of his holiness. Excerpt:

Yet rather than answer NBC’s Anna Matranga’s question on the plane asking if these claims were true, Francis said the document spoke for itself and that journalists had enough ‘professional maturity’ to reach their own conclusions. Later, he said, ‘maybe I will say some more.’

Some commentators saw this as a ‘stalling tactic’; others said Francis was refusing to play ‘a game that’s 2,000 years old’, in other words, to be drawn into the thickets and weeds of ecclesiastical intrigue. One commentary observed that rather than ‘accusing others and blameshifting,’ Francis ‘simply, in a very calm and dignified way, stimulated an objective and dispassionate investigation from third parties and entrusted himself to whatever the outcome may be, for he doesn’t fear truth, but rather is confident that truth will vindicate him.’

Bergoglio’s 1990 essay, ‘Silence and Word’, suggests a deeper spiritual purpose to his silence, one drawn from a meditation on the Passion in the Third Week of the Spiritual Exercises. There St Ignatius describes how in the Passion, God ‘goes into hiding’, concealing, as it were, his divinity.

This is a very different kind of silence from, say, the silence of complicity or the silence of inaction faced with evidence of evil, as we have seen too often in the case of sexual abuse of minors.

The purpose of Christ’s self-emptying silence — his meekness faced with ferocious hostility — is to create space for God to act. This kind of silence involves a deliberate choice not to respond with an intellectual or reasoned self-defence, which in a context of confusion, of claims and counter-claims and half-truths, simply fuels the cycle of hysterical accusation and counter-accusation. It is a spiritual strategy to force the spirits behind the attack to reveal themselves.

Well, that’s one way of looking at it. Christopher Ruddy, a professor at Catholic University in DC, points out that it’s the same way that the Legionaries of Christ in 2004 regarded the silence of their founder, Marcial Maciel, in the face of serious and credible accusations that he was an abuser. From the document:

1. Fr. Marcial Maciel has received during his life a great number of accusations. In the last few years, some of these were presented to the Holy See so that a canonical process would be opened.

2. Facing the accusations made against him, he declared his innocence and, following the example of Jesus Christ, decided not to defend himself in any way.

Maciel, of course, was guilty as hell.

This doesn’t make Francis guilty of the accusations Vigano makes against him. But you really have to be a hardcore drinker of the Bergoglian Kool-Aid to accept the line that the pontiff’s silence makes him Christ-like. In 2015, Francis told 165 cardinals gathered in Rome that he wants “absolute transparency” in the running of the Roman Curia, which is notoriously corrupt. As recently as this past summer, Francis was still banging the gong for “transparency.”