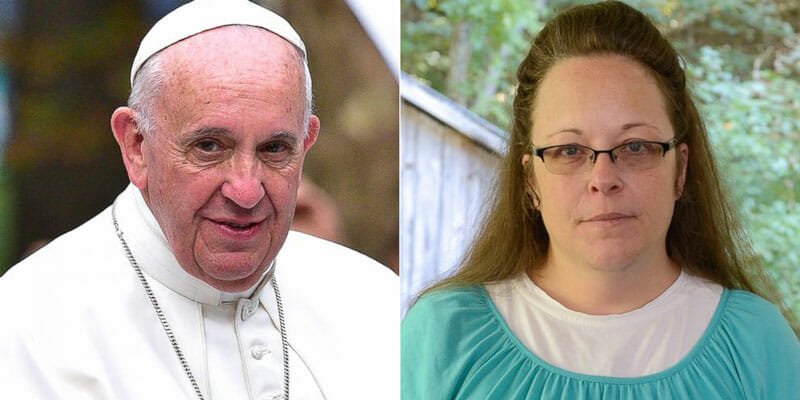 The New York Times writes about the contretemps between Archbishop Vigano and the Vatican over the 2015 meeting Pope Francis had with Kim Davis. Team Francis has responded to Vigano’s defense, and in so doing, has confirmed his basic narrative. Excerpts:

Archbishop Viganò said in the letter that he had fully briefed Francis and his top advisers, all of whom he named, about Ms. Davis and her “conscientious objection” to promoting same-sex marriage. He received approval from them all, he said.

On Sunday, Father Lombardi issued a joint statement with the Rev. Thomas Rosica, who has also spoken for the Vatican in the past, making note of “the fact that Viganò had spoken the night before the meeting (with Kim Davis) with the pope and his collaborators and had received a consensus.”

Father Lombardi and Father Rosica nevertheless said Francis had felt “deceived” by Archbishop Viganò. Contrary to the claims of the archbishop, they said, the pope was furious over the meeting, which threatened to eclipse the entire visit to the United States by derailing his message of inclusion.

In the days after the [2015] media tempest about the meeting, the Vatican sought to distance Francis from Ms. Davis and put the blame on Archbishop Viganò.

The Vatican press office asserted that the pope had never received Ms. Davis in a private audience and said the pope had probably not been briefed. The Vatican instead highlighted Francis’ warm meeting at the Washington Embassy with a gay former student and his partner.

This week, an article in The New York Times quoted a Chilean abuse survivor, Juan Carlos Cruz, as recounting that Francis had told him that Archbishop Viganò sneaked Ms. Davis into the Vatican Embassy in Washington for the private meeting. The pope told him he had not known who she was or why she was a contentious figure, Mr. Cruz said.

Mr. Cruz recalled the pope saying, “I was horrified and I fired that nuncio.”

Archbishop Viganò, in the letter published on Friday by LifeSiteNews, a conservative Catholic outlet, said Mr. Cruz’s account had prompted him to set the record straight.

“One of them is lying: either Cruz or the pope?” he wrote. “What is certain is that the pope knew very well who Davis was, and he and his close collaborators had approved the private audience.”

On Sunday, the pope’s allies seemed to confirm that.

Well, how about that!