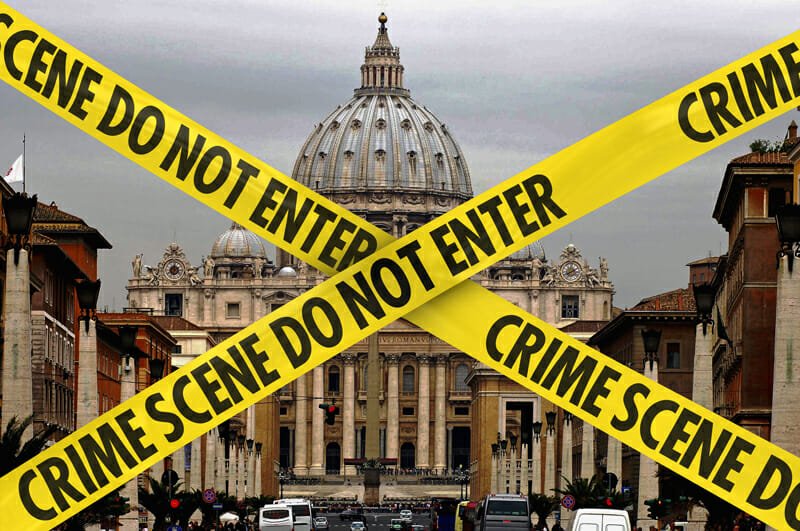 Time’s up for Pope Francis and the leaders of the Catholic Church.

Catholics everywhere — and anyone who cares about children — should demand that our criminal justice system start treating the Roman Catholic Church for what many victims believe it is: an international criminal conspiracy to cover up the rape of what in the United States alone might amount to 100,000 children.

very attorney general in the country should use their subpoena powers to force the church hierarchy to give up their long-held secrets of clerical crimes. Every state legislature should eliminate the statute of limitations on sexual crimes against children. In every state, clergy should be mandated reporters of alleged sexual abuse.

Send in the feds, too. As recommended by the Survivors Network of those Abused by Priests (SNAP), amend the Racketeer Influenced and Corrupt Organizations Act (RICO) to allow federal prosecutors to hold church leaders criminally responsible for their roles in covering up sex crimes against children.

In the 16 years since the Boston Globe Spotlight Team revealed what was then considered shocking evidence of widespread clergy sexual abuse, the church has proved only one thing: However good its intentions, it can’t clean up its own mess. This is not an indictment of all priests; most serve honorably. But predator priests and their protectors need to be held criminally accountable. And prosecutors should get the tools they need to make that happen.

Since the Spotlight Team broke open the story of clergy sexual abuse, only four AGs — in Pennsylvania, New Hampshire, Maine, and Massachusetts — have used their subpoena power to force the church to turn over their records on priests accused of sexual abuse. A grand jury report, issued recently by Pennsylvania Attorney General Joshua Shapiro, shows the ongoing challenge of prosecuting decades-old crimes. In horrifying detail, the grand jury report documents cases involving more than 300 priests across the state who sexually abused more than 1,000 children over the past 70 years. Over that time span, the church hierarchy did what it always does — it protected the predators. Now, because of Pennsylvania’s statute of limitations on reporting sexual abuse, Shapiro said only a few criminal cases will result from the 18-month probe. “As a consequence of the cover-up, almost every instance of abuse we found is too old to be prosecuted,” Shapiro said.