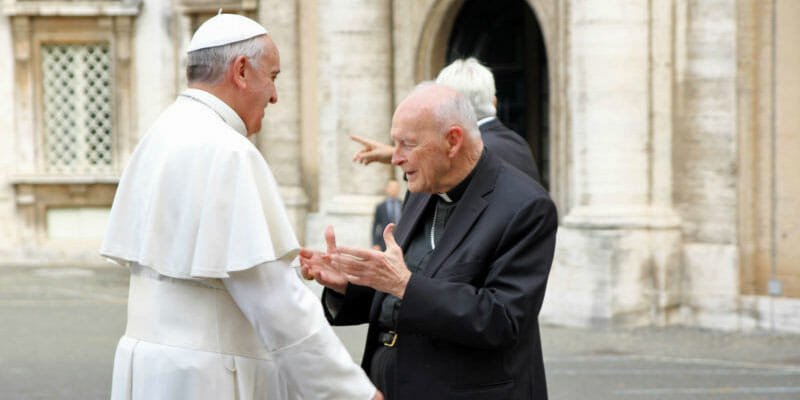 Archbishop Viganò made four major claims. But do the facts support them?

Archbishop Carlo Maria Viganò’s testimony, published on Saturday, goes on for 7,000 words and names more than 30 public figures, mostly to denounce them. But at its heart are a small number of very serious allegations about Pope Francis’s treatment of Theodore McCarrick. Since the letter’s publication, some more evidence has emerged against which to test Viganò’s major claims. How do the allegations stand up?

Viganò writes: “Pope Benedict had imposed on Cardinal McCarrick sanctions similar to those now imposed on him by Pope Francis: the Cardinal was to leave the seminary where he was living, he was forbidden to celebrate [Mass] in public, to participate in public meetings, to give lectures, to travel, with the obligation of dedicating himself to a life of prayer and penance.” These came into place, Viganò says, in 2009 or 2010.

Do the facts support the claim? Mostly – but there are complications. Several glimpses have been recorded of sanctions on McCarrick:

One complication is that not all sources have corroborated Viganò’s story. According to America magazine, some “Vatican officials … who asked not to be named said they knew nothing about sanctions or restrictions on Archbishop McCarrick.” That doesn’t discredit Viganò’s account – he always claimed that the sanctions were only communicated through a few channels – but it makes it harder to confirm.

Another complication is the numerous accounts of McCarrick turning up in public: preaching at St Patrick’s Cathedral, performing an ordination, appearing at celebratory events – in other words, not acting like a man under Vatican restrictions. Viganò’s explanation is that McCarrick “didn’t obey” the sanctions. Indeed, the Washington Post’s source said McCarrick ignored Vatican strictures: “He did whatever he damn well wanted.”

Sometimes McCarrick even appeared at events with Viganò or Benedict. Again, Viganò has an explanation: as nuncio, he didn’t have the authority to impose sanctions directly, while Benedict was too mild-mannered to rebuke McCarrick at a public event.

The most plausible conclusion, based on what we know, is that Benedict did indeed impose sanctions, but wasn’t willing and/or able to make them comprehensive.

Viganò alleges Pope Francis “knew from at least June 23, 2013 that McCarrick was a serial predator.” The date is precise because on that day, three months after Francis’s election, the new Pontiff met Viganò. At the meeting, the archbishop says, he told the Pope: “I don’t know if you know Cardinal McCarrick, but if you ask the Congregation for Bishops there is a dossier this thick about him. He corrupted generations of seminarians and priests.” He further claims that Francis did not make any comment or seem surprised.

Do the facts support the claim? Inevitably, it’s hard to say – nobody can read the Pope’s mind. Francis is famously well-informed about Vatican goings-on, and several close observers have said that “everyone knew” about the charges against McCarrick. But that is circumstantial. Again, it is strange that Francis has refused to comment on Viganò’s claim, but silence is not an admission. So the question is – could Viganò really invent such a spectacular libel?

According to Viganò, when Francis became Pope, McCarrick was released from the previous sanctions: “from the time of Pope Francis’s election, McCarrick, now free from all constraints, had felt free to travel continuously, to give lectures and interviews.”

Do the facts support the claim? The facts are, at least, not inconsistent with Viganò’s allegation. It has been widely observed that McCarrick had a new lease of life under Francis. In 2014, a highly sympathetic profile of McCarrick in the National Catholic Reporter said that

“McCarrick is one of a number of senior churchmen who were more or less put out to pasture during the eight-year pontificate of Pope Benedict XVI. But now Francis is pope, and prelates like Cardinal Walter Kasper (another old friend of McCarrick’s) and McCarrick himself are back in the mix and busier than ever… [McCarrick] was sort of spinning his wheels under Benedict. Then Francis was elected, and everything changed.”

The profile said that McCarrick was making trips abroad “at the behest of the Vatican”, and that Pope Francis “knows that when he needs a savvy back-channel operator, he can turn to McCarrick, as he did for the Armenia trip.”

In the US, too, there’s some evidence that McCarrick was given more freedom. As one of Rod Dreher’s correspondents has noted, from 2001-06 McCarrick attended each “Cardinals Dinner” hosted by the Catholic University of America. Then in 2007-12 he abruptly stopped. But in 2013, after Francis became Pope, McCarrick became a regular attendee once more. That roughly matches Viganò’s story.

It does seem, then, that whatever sanctions had been in place under Benedict evaporated under Francis. But, as observed above, the nature of those sanctions is fuzzy. How official were they? Did Francis knowingly lift the sanctions, or did they just cease to function because Benedict was no longer around?

The Associated Press, in a report which has never been denied, said that Pope Francis reduced sanctions against some abuser priests. But that doesn’t mean he would have done the same with McCarrick.

Again, Viganò’s testimony fits well with the facts. But we still have to assume that Viganò is not a liar.

Viganò alleges that Pope Francis made McCarrick “his trusted counsellor”. Importantly, McCarrick is supposed to have helped to pick bishops: “The appointments of Blase Cupich to Chicago and Joseph W. Tobin to Newark were orchestrated by McCarrick” and others, Viganò claims. McCarrick, the archbishop says, “had become the kingmaker for appointments in the Curia and the United States, and the most listened to advisor in the Vatican for relations with the Obama administration.” Thanks to McCarrick, Viganò tells us, Cardinal Burke did not retain his place in the Congregation for Bishops – which plays a vital role in selecting bishops – and Cardinals Wuerl and Cupich were parachuted into the Congregation. Another McCarrick associate, Archbishop Ilson de Jesus Montanari, allegedly became Secretary of the Congregation thanks to McCarrick.

Do the facts support the claim? Broadly, yes, though not every detail can be confirmed. As recorded above, McCarrick certainly gained influence and status when Francis became Pope. The well-connected Vatican journalist Rocco Palmo, of Whispers in the Loggia, wrote in 2016 that “Francis is said to revere [McCarrick] as ‘a hero’ of his.” Palmo has also corroborated the idea of McCarrick as kingmaker, reporting that

“in mid-Sept 2016, Card McCarrick wrote a letter to the Pope…seeking the appointment of Joe Tobin to Newark; 2 sources w/direct knowledge of it told Whispers shortly thereafter. To that point in the process, Tobin’s name hadn’t figured…”

Palmo has stood by his reporting despite what he calls “thuggish and almost unbelievable” attempts to make him renounce it.

Another Vatican journalist, Sandro Magister, reported at the time of Cupich’s appointment as Archbishop of Chicago: “The appointment of Cupich is thought to have been recommended to the Pope with particular enthusiasm by Cardinal Óscar Andrés Rodríguez Maradiaga and above all by Cardinal Theodore McCarrick, archbishop emeritus of Washington.”

However, Cardinal Cupich himself said this week that, while he doesn’t know exactly how his appointment was decided, “I don’t think that I needed one person to be my advocate.”

Such matters will always be relatively mysterious. But Viganò’s claim, in this instance, seems plausible enough.