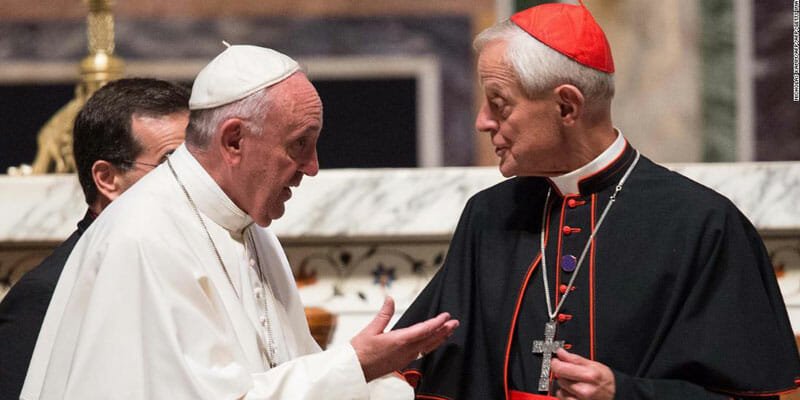 The cardinal’s repeated denials of knowledge and responsibility for sexual-abuse cover-ups defy all credibility.

The Catholic Church’s nightmare of a summer began with Theodore McCarrick. After news broke in June about his past sexual misconduct, including the abuse of minors, he resigned from the College of Cardinals and was exiled to a life of prayer and penance, out of the public eye. But the Archdiocese of Washington, which McCarrick once oversaw, remains very much in the eye of the storm.

There, McCarrick’s direct successor, the embattled cardinal Donald Wuerl, clings to his leadership role, even after weeks of criticism and calls for his resignation. He has done little to silence them and much to bring further censure upon himself.

In Something More Pastoral, a 2015 book about Wuerl’s life and work, the authors hail him as a public figure “known for his professional transparency.” This summer has indicated precisely the opposite.

Incredibly, Wuerl has insisted for two months that he had never heard anything of McCarrick’s predatory behavior — despite two legal settlements that were made to victims from McCarrick’s time in New Jersey, and despite testaments that the former cardinal’s coercive sexual overtures toward seminarians were common knowledge among the clergy.

From June until today, Wuerl has stuck to his story: I’ve seen no evil, heard no evil, spoken no evil. Given what we’ve learned since, the claim borders on the absurd.

Wuerl’s reputation for openness was assailed by the release of the Pennsylvania grand-jury report, in which his name appears more than 200 times. It alleges that, as bishop of the Pittsburgh diocese, he reassigned or otherwise covered for priests who were found to have sexually abused minors. Predictably, though, Wuerl denied any wrongdoing yet again, insisting ad nauseam that his oversight of sex-abuse cases was impeccable.

Catholics in his archdiocese, meanwhile, experienced no “professional transparency” with regard to the substance of the report. Instead, they’ve been treated to weeks of rhetorical chicanery. The archdiocese immediately cobbled together a website called “The Wuerl Record,” which marshaled weak evidence in his defense; the page was hastily deleted after a barrage of criticism. At the Cathedral of St. Matthew, Wuerl’s home church in the District of Columbia, parish bulletins included a July 31 interview in which Wuerl categorically denied knowledge of McCarrick’s misconduct — weeks before the Pennsylvania report had even been released. The cardinal was even caught making statements about his tenure in Pittsburgh that directly contradicted the diocese’s own documentation.

At a moment of obvious crisis, the cardinal and his archdiocesan team chose to deny the truth and play PR games, and they did so poorly at that.

Now, McCarrick’s sexual misconduct rests at the heart of Archbishop Carlo Maria Viganò’s bombshell testimony, released to media last weekend. Viganò claims that after learning of the cardinal’s sexual misconduct, Pope Benedict XVI placed sanctions on him in 2009 or 2010 and that those sanctions were later lifted by Pope Francis. As observers have come to expect, Wuerl has denied any knowledge of this, too.

Subsequent reports have rendered the cardinal’s repeated denials of responsibility wholly implausible. Two sources have confirmed to the Catholic News Agency, for instance, that they were present at a meeting where McCarrick was told that, at the direct instruction of Pope Benedict, he had to move out of Redemptoris Mater Archdiocesan Seminary in Washington — seeming to verify the existence of the sanctions Viganò cites.