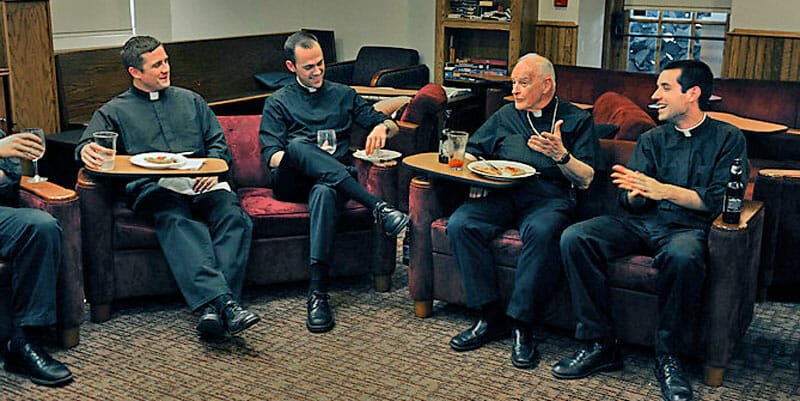 McCarrick had seminarian assistants until June 2018, about a year after the archdiocese knew he was being investigated

The Archdiocese of Washington has confirmed that seminarians were permitted to serve as assistants to Archbishop Theodore McCarrick while the archbishop was being investigated for the alleged sexual abuse of a teenager.

In 2011, McCarrick moved from a parish rectory to a house adjacent to the seminary of the Institute of the Incarnate Word (IVE), a religious order, in Chillum, Md., within the Washington archdiocese.

According to two former IVE seminarians on campus at the time, McCarrick lived in a separate house on the grounds, which he paid for himself, or at least arranged to have purchased for him.

The IVE initially assigned McCarrick a priest to serve as secretary for him once he was living on the property. Sources confirm that the priest was assigned to live in the house with McCarrick.

Archdiocesan records confirm that priests were given this assignment, and a spokesman told CNA it is likely the archdiocese provided some financial support for the role.

Former IVE seminarians told CNA that McCarrick made significant demands of staff and formators. CNA was told, for example, that despite the austere lifestyle encouraged by the order, McCarrick had his own VIP menu served to him in the refectory, regardless of what the priests and seminarians were eating.

Local formators and superiors of the IVE were, according to CNA’s sources within the order, unhappy with the arrangement, but recognized that the liberal-minded McCarrick functioned as a sort of informal patron for the order, despite its more traditional leanings. McCarrick frequently ordained the order’s priests, in Washington and abroad, and helped them to navigate criticisms from South American bishops, including Archbishop Jorge Bergoglio, who became Pope Francis.

The Institute of the Incarnate Word was founded in 1984 in Argentina by Fr. Carlos Miguel Buela. Buela retired in 2010 amid suspicion of sexual misconduct. In 2016, the Vatican affirmed the veracity of allegations that Buela engaged in sexual improprieties with adult seminarians of his community; the priest was forbidden by the Vatican from contact with members of the IVE, and from appearing in public.

McCarrick’s assistance has been reported to have been especially important to the order as allegations against Buela came to light. But sources say that help came with a price. One source characterized McCarrick’s attitude toward the group as “If you’re grateful, you’ll shut up.”