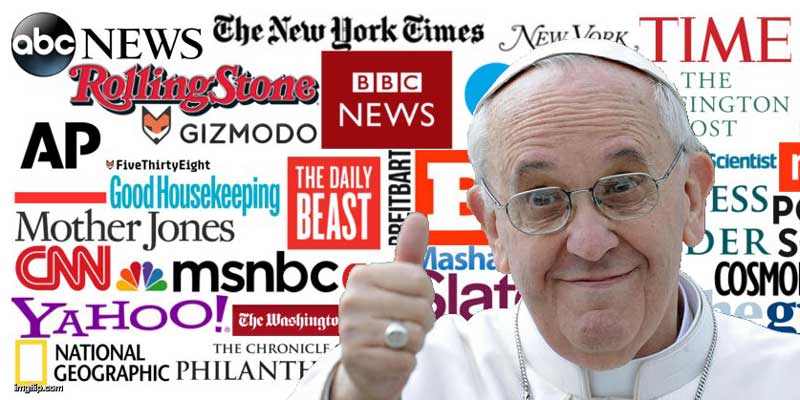 Irish journalist John Waters lays it out cold, accusing his colleagues of going soft of Francis on the sex abuse question, post-Vigano, because they want to protect his gay-friendly agenda:

The pope replied: “I will respond to your question, but I would prefer last—first we speak about the trip, and then other topics. … I read the statement this morning, and I must tell you sincerely that, I must say this, to you and all those who are interested. Read the statement carefully and make your own judgment. I will not say a single word about this. I believe the statement speaks for itself. And you have the journalistic capacity to draw your own conclusions. It’s an act of faith. When some time passes and you have drawn your conclusions, I may speak. But, I would like your professional maturity to do the work for you. It will be good for you. That’s good.”

To the uninitiated, this seems like a desperate prevarication mixed with feeble flattery, a playing for time. But if it was a prevarication, it turned out to be an effective one: The pope’s refusal to answer the question was meekly accepted by the journalists present, who would surely have brought the plane down had the pontiff’s name been Benedict or John Paul. The Viganò story has since gained little traction in the mainstream, except for the purpose of discrediting the archbishop. It was as through the pope’s weak waffle was absorbed by some invisible padding of the plane’s walls. Even yet, Archbishop Viganó’s intervention is being treated by the Irish media as some kind of outrageous exercise in party-pooping, revealing—if anyone was in any doubt—that the abuse scandals have chiefly been regarded by media people as an opportunity to prosecute an agenda rooted in other matters.

And when you read the pope’s response again in light of what has happened—or not happened—in the several days since, it acquires an ominous tenor, inviting a stab at a new translation. Here is mine:

Read the statement in the knowledge of the relationship you and I share: We are men and women of the world and like-minded on what is important. We know where we stand on matters like homosexuality and homosexual priests. But be careful how you handle this Viganò business—a wrong word could undo all we have achieved. I have faith in you to figure out who this man is. Do your work well and there will be no need for me to risk my position. Once you have defused the situation, I will deal with Viganò for the record. We are all adults here. I know I can count on you. I need your help on this, but we have an understanding that has worked well so far. Trust me.

Boom. Read the whole thing. I think he’s nailed it. You will have noticed that most of the reporting post-Vigano has been about Vigano’s supposed motivations and connections to conservatives. The outrageous fact that almost a week has gone by with neither the Pope nor any of the cardinals Vigano accuses answering his corruption seems not to have inflamed most of the international media.