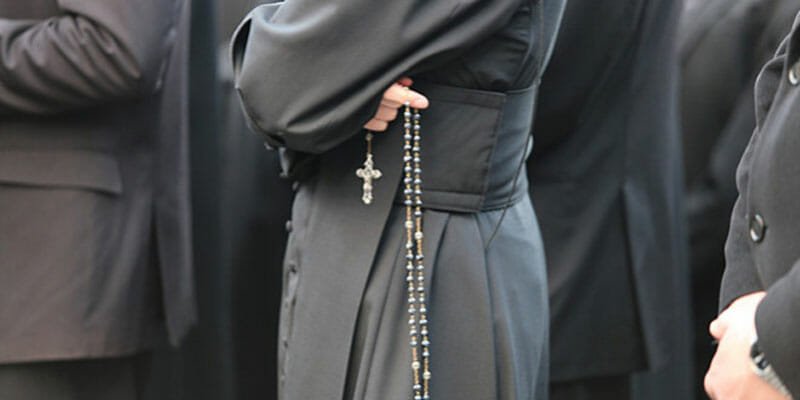 A scene from The Shawshank Redemption popped into my head yesterday. The Shawshank Redemption is a movie based on Stephen King’s novel about a falsely convicted man in a New England prison. The scene that came to me was when Andy Dufresne, played by Timothy Robbins, was discussing new evidence of his innocence with the prison warden, Warden Norton, played by Bob Gunton. Norton listens to Dufresne’s compelling evidence, then dismisses it as mere fiction or nothing more than a distraction. Dufresne asks, “How can you be so obtuse … is it deliberate”? Norton loses his cool and has Dufresne thrown into solitary confinement for a month while he arranges the murder of the key witness in Dufresne’s newly discovered innocence.

Use whatever words you desire: obtuse, daft, deliberate indifference… The fact is, there are numerous bishops who cannot respond appropriately to the horrific destruction occurring within the Church today.

If you had the opportunity to watch Cardinal Cupich’s interview on Chicago’s NBC affiliate, WMAQ, Chanel 5, you watched the perfect rendition of Warden Norton, only with a pectoral cross conveniently tucked under his blazer. The reporter asks Cardinal Cupich how he responds to Archbishop Carlo Maria Viganó’s assertion that disgraced Archbishop Theodore McCarrick orchestrated Cupich’s appointment as Archbishop of Chicago and eventual elevation to the College of Cardinals.

Cardinal Cupich’s response is staggering due to his seeming disregard for the victims of sexual assault and sexual harassment, his undeniable failure to prioritize the needs of society, and his transparent effort to deflect attention from his own relationship to McCarrick by any means possible, even if it means labeling Pope Francis as a Latino, so he can then claim that critics of Francis should be dismissed as racists.

Cardinal Joseph Tobin of the Archdiocese of Newark issued a short statement that rivals the carnival of Cupich’s interview. In Tobin’s statement, he claims that Vigano’s letter “cannot be understood as contributing to the healing of survivors of sexual abuse.” He goes on to claim that the letter contains “factual errors, innuendo and fearful ideology.” Immediately after this, he explains how it will help the Archdiocese of Newark “strengthen our conviction to move ahead resolutely in protecting the young and vulnerable.”

How can a dishonest letter which cannot be understood to contribute to the healing of victims help to protect the young and vulnerable? It is either a letter to be taken seriously and investigated or it is what Cardinal Cupich calls “a rabbit hole.” As for the factual errors, where are they? If Cardinal Tobin has evidence to show the letter to have errors, he should be presenting that evidence now. To the contrary, Vigano has provided evidence that his letter is not inaccurate, and others have verified that he is telling the truth. These supporting witnesses include a letter from two auxiliary bishops correcting their letter which had mischaracterized a discussion with Vigano, Monsignor Jean-François Lantheaume, and none other than Pope Emeritus Benedict XVI.

Rounding out the triumvirate of disdain is Bishop Robert McElroy of San Diego. In McElroy’s strangely worded response, he claims that Vigano hates Pope Francis and that Vigano “consistently subordinates the pursuit of comprehensive truth to partisanship, division and distortion.” You have to wonder who writes Bishop McElroy’s press releases. Again, these claims are made without any evidence, and in the face of ample evidence to the contrary. A number of bishops have confirmed that Vigano has always been a very respectable and faithful servant of the Church and the people of God. And though there is no evidence that Vigano hates Pope Francis, should we limit our focus on emotional responses and ignore the evidence of corruption?

Among all this chaos, we should not overlook one theme which tends to run under the radar in the rhetoric from those who wish to discredit Vigano. McElroy, Tobin, and others frequently remind us that they are committed to protecting “minors and vulnerable adults” or “the young and vulnerable.” Who isn’t?

What concerns many of us is not a lack of commitment in the protection of children and the vulnerable, it is the total inability to admit that we have a lot of priests and seminarians who apparently think it is perfectly acceptable to lead sexually active lifestyles and that most of these lifestyles are homosexual. All the evidence suggests (including the Pennsylvania Grand Jury Report) that the Church’s effort to protect minors and vulnerable people (the Dallas Charter) has been very effective. In other words, it is not difficult to be committed to protecting people when the safety measures in place are protecting them better than any other measures in institutions which deal with large numbers of children.

In fact, if Vigano’s letter is accurate, and it appears it is on at least this point, Pope Emeritus Benedict XVI took steps to protect seminarians from Archbishop McCarrick, but the American hierarchy failed to follow through. For a time, McCarrick had to change his routine, but according to a CNA article, he was still able to find a young roommate: “McCarrick is reported to have had, for a time, an IVE brother in formation living in his residence, which was on the parish property but separate from the house of formation.” Vigano tells us after that, Pope Francis removed the restrictions on McCarrick and made him a close advisor. This does not sound like any sort of protection of seminarians.

While Cupich, Tobin, McElroy and even Cardinal Wuerl, all suggest that Vigano is trying to divert attention away from the real problem (whatever they think that is), it is evident that they are actually intentionally or obtusely diverting attention from the problem which is actually killing the Church today, and that is the destruction of seminaries and seminarians.