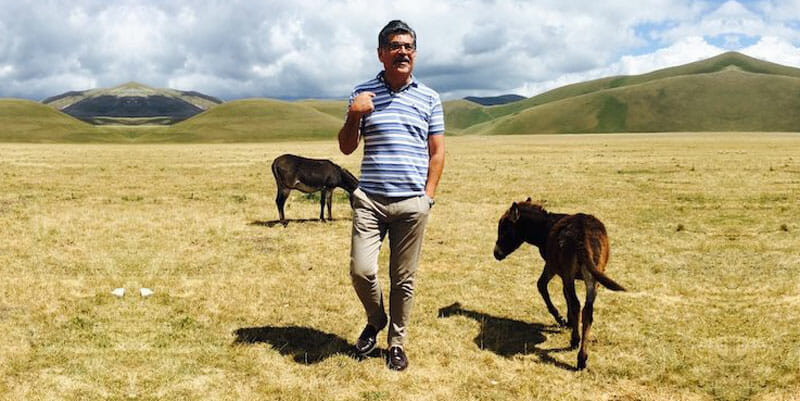 I’m going to Italy early next month to give a series of talks about The Benedict Option, which has been published in Italian. This weekend, I was working on my speech, and re-read Pope St. Gregory the Great’s biography of the saint, which is the only source of information we have about his life. This is the prologue:

There was a man of venerable life, blessed by grace, and blessed in name, for he was called “Benedictus” or Benedict. From his younger years, he always had the mind of an old man; for his age was inferior to his virtue. All vain pleasure he despised, and though he was in the world, and might freely have enjoyed such commodities as it yields, yet he esteemed it and its vanities as nothing.

He was born in the province of Nursia, of honorable parentage, and brought up at Rome in the study of humanity. As much as he saw many by reason of such learning fall to dissolute and lewd life, he drew back his foot, which he had as it were now set forth into the world, lest, entering too far in acquaintance with it, he likewise might have fallen into that dangerous and godless gulf.

Therefore, giving over his book, and forsaking his father’s house and wealth, with a resolute mind only to serve God, he sought for some place, where he might attain to the desire of his holy purpose. In this way he departed, instructed with learned ignorance, and furnished with unlearned wisdom.

All the notable things and acts of his life I could not learn; but those few, which I mind now to report, I had by the relation of four of his disciples; namely, Constantinus, a most rare and reverent man, who was next Abbot after him; Valentinianus, who for many years had the charge of the Lateran Abbey; Simplicius, who was the third superior of his order; and lastly of Honoratus, who is now Abbot of that monastery in which he first began his holy life.

You can read the entire biography here. Note that Gregory, who was born circa 540, not long before Benedict died, got this information from those who almost certainly knew Benedict personally. They were witnesses.

In the Prologue, we learn that St. Benedict decided to leave the city of Rome, and the world, because of its corruption. As we learn in Chapter 1, Benedict and his nurse went to Enfide, but he then left the nurse behind, and went to live secretly in a narrow cave in Subiaco, where he fasted and prayed. He was cared for by a monk named Romanus, who would bring him bread from time to time. After three years of prayer, fasting, and Scripture study, this:

About the same time likewise, certain shepherds found him in that same cave: and at the first, when they spied him through the bushes, and saw his apparel made of skins, they  thought that it had been some beast. After they were acquainted with the servant of God, however, many of them were by his means converted from their beastly life to grace, piety, and devotion. Thus his name in the country there about became famous, and many after this went to visit him, and in exchange for corporal meat which they brought him, they carried away spiritual food for their souls.

Eventually, Benedict was persuaded to leave the cave:

When this great temptation was thus overcome, the man of God, like to a piece of ground well tilled and weeded, of the seed of virtue brought forth plentiful store of fruit: and by reason of the great report of his wonderful holy life, his name became very famous. Not far from the place where he remained there was a monastery, the Abbot whereof was dead: whereupon the whole Convent came to the venerable man Benedict, entreating him very earnestly that he would vouchsafe to take on him the charge and government of their Abbey: long time he denied them, saying that their manners were divers from his, and therefore that they should never agree together: yet at length, overcome with their entreaty, he gave his consent.

It did not go well for him. But God had other things in mind for Benedict. In Dom Georg Holzherr’s rich commentary on the Rule of St. Benedict, he observes that

Benedict himself stood in the midst of forces of the time, in the monastery to be sure, but not withdrawn from the world. According to Gregory he participated in the evangelization of the country people and met with important people in Rome, Cassinum, and elsewhere.

When I talk about modern lay Christians taking the “Benedict Option,” I’m talking about withdrawing from the ordinary life of the chaotic and dissolute world, retreating into a deeper encounter with God (prayer, fasting, Scripture study, etc.), and then returning in a limited way to the world to share the fruits of our spiritual labors. We do not live in a monastery, so will unavoidably be more engaged with the world than Benedictine monks are. That said, if we accept that the condition of the world today is like that of Rome under barbarian rule, as it was in Benedict’s time, then we must also accept that our own homes and lives must be in some sense “monastic” — intentionally set apart from the world in meaningful ways.