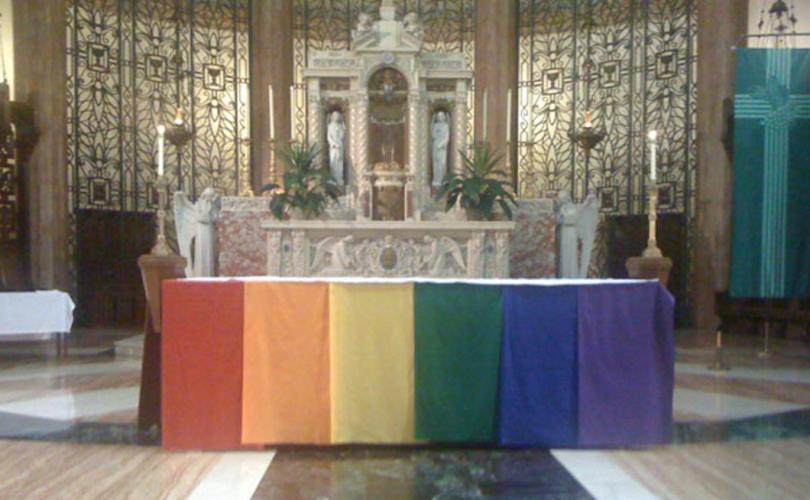 On June 24, 2018, at Our Lady of Grace Catholic Church in Hoboken, New Jersey, the Archdiocese of Newark, Fr. Alexander Santora celebrated the Parish’s “first annual gay pride Mass.” At the beginning of Mass, Santora announced that he would offer a “special blessing” for those marching in the New York City gay “Pride” parade, which took place on the same day.

Alexander Santora, a priest in the Archdiocese of Newark, is a frequent contributor to NJ.com. A repeated topic he discusses in his column is the LGBT issue. In 2013 – as several cases on the State level concerning same-sex marriage worked their way through the Courts – Santora wrote:

Churches tend to makes change at a glacial pace. Yet, in two watershed decisions, the U.S. Supreme Court has validated the movement toward same-sex marriage that only began to register with American society a little over a decade ago.

He also quoted the response from the U.S. Conference of Catholic Bishops:

Today is a tragic day for marriage and our nation. The Supreme Court has dealt a profound injustice to the American people by striking down in part the federal Defense of Marriage Act. The Court got it wrong. The federal government ought to respect the truth that marriage is the union of one man and one woman, even where states fail to do so.

Then he added the following:

The Catholic bishops appealed to “the common good of all” and called for “a society that strives to uphold the truth of marriage.” The Supreme Court of the land, however, has expanded the notion of common good and an expansive view of marriage.

In 2015, Santora wrote an article in which he resoundingly praised the late Jesuit John J. McNeill – the founder of the dissident “gay” Catholic movement. Santora wrote of McNeill: “McNeill’s courage and brilliance started the church on a trajectory that it is still trying to define.” According to Fr. John Harvey: “The dissenting theologian who has had the greatest influence on Catholic homosexual persons is probably John J. McNeill, S.J.” In his landmark 1976 work “The Church and the Homosexual,” McNeill wrote:

Since most gay people experience their homosexual orientation as a part of creation, if they accept this Church teaching, they must see God as sadistically creating them with an intrinsic orientation to evil. Most gays would prefer to see the Church teaching as wrong, rather than believe God is sadistic.

McNeill left the priesthood, and in 2008, he married his same-sex lover.

Before Santora’s homily, a candle was lit and placed upon the rainbow flag in memory of those “gay” and “lesbian” parishioners who “[lived] a life of fear because the Church and society rejected them.”